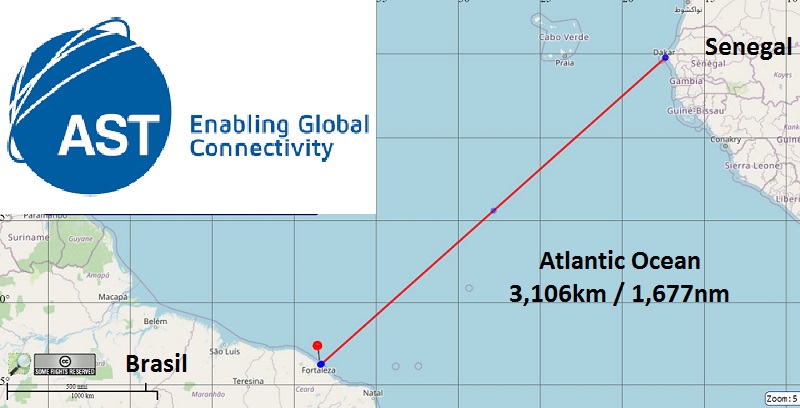 Swim the Big Blue 2 follows the 2016 expedition (STBB1) in which Ben became the first to gain a verfiied attempt to swim every single mile of The Atlantic Ocean (WOWSA, 2017).

It is with so many lessons learnt from 2016, that in October 2022, Ben Hooper will be reattempting the world first swim from Senegal, West Africa to Fortaleza, Brasil. For 200 days, Ben will battle the elements of the Atlantic Ocean for up to 8 hours per day, consuming upwards of 10,000 calories per day as he swims over 3,000km for North East Brasil to become the first human ever to complete a full and verifiable swim of every single mile of the Atlantic Ocean from continental coastline of mainland Africa (Dakar) to continental coastline of mainland South America (Fortaleza). This will be verified by WOWSA for GwR and is all for our charities and conducting world-first ocean fabric and human endurance, astronautical and swimming research.

Along the way, his experienced team will undertake research with ocean partners AtlantECO & Plankton Planet and human physiology research with The University of Portsmouth, Extreme Environment Labs & Professor Mike Tipton and Dr Heather Lunt & Professor Igor Mekjavic of The Jozef Stefan institute. Further, we are providing schools and research information across our website pages and all will be filmed for TV.

Together, in a time where the world needs to come together more than ever to stop the pandemic and heal our world, let us work together to unite our nations, help our children's mental health and give them a future, and a planet they deserve.

"Together, we can achieve the extraordinary."

History remains important to be learnt from but with a world-first, I found there was nothing to hang onto but knew there had been a few unverified attempts. Today, a full Atlantic Ocean swim from continent to continent remains a world-first to be achieved (GWR, 2020).

Previously, in 1994, Guy Delage, was said to have swum 2,100 miles from Cape Verde to Barbados in 55 days, using a self-supporting raft and drifting whilst sleeping. However, time on board drifting was not recorded and there were no witnesses or apparent logs when he arrived 55 days later in The Caribbean.

In 1998, Benoit Lecomte claimed to have taken 73 days to swim from Hyannis, USA to Quiberon, France. Lecomte claimed to have swum across The Atlantic Ocean using support boats and taking a rest at night. At one point he stopped in the Azores for 6 days during his 3,716 mile journey. He stated that he had spent 8 hours swimming each day in sessions of about two to four hours in length. However, the speed of his swim according to miles that were recorded would have required a swim speed of an average of 8 miles per hour. This would be impossible to achieve or maintain for even the greatest Olympic or Marathon swimmer.

In 2009, Jennifer Figge, swum part of The Atlantic Ocean from the Cape Verde Islands to Chacachacare Island, Trinidad. A total of 2,160 miles travelled, spending much of her time allegedly in a shark cage attached to her support vessel while swimming up to 8 hours per day, battling strong winds and waves of up to 30 feet. She had originally planned to swim to the Bahamas but was blown 1,000 miles (1,600 km) off course according to reports and according to Jennifer’s PR team, she had never intended to swim The Atlantic in full, just one part of it. The exact mileage swam remains unclear.

Further, in 2010, Jennifer Figge swam once more from Cape Verde to Trinidad in a total of 31 days. Swimming six hours per day, 17 miles per day; she swam for a total of 139 hours and 25 minutes and swam 300.86 miles of the 2,186 mile trip.It is stated also that in 2013, Figge completed another swim. This time she swam a total distance of 257.5 nautical miles (477 km) over the course of 32 days. She departed from Cape Verde (417 miles off the coast of West Africa) on April 8th and landed on the shores of Antigua in the Caribbean Sea, on May 9th 2013. However, following a lot of reading and emails to these people (none of whom replied), it became apparent that none of these individuals had actually swum the entire distance of The Atlantic Ocean from continent to continent and therefore, crossed the entire Atlantic, swimming every single mile. Guiness Wolrd Records & WOWSA verfied this fact.

On examining the few facts that exist, Mr Lecomte clearly did drift on his support vessels or indeed sailed and there is no accounting for his lost miles being regained by swimming or steering of the vessel and it would appear he did stop for approximately 6 days on island(s). It is also not known exactly how many miles he did swim nor has any record or log been produced since.

In 2016, Ben Hooper became the first human in history to gain a verified attempt from WOWSA of attempting to swim every single mile of The Atlantic Ocean. Leaving Dakar, Senegal (continental Africa) November 2016, Ben swam up to two, four-hour sessions in daylight hours, to agreed rules with WOWSA and Guinness World Records, using English Channel Rules for swim gear and support vessel/kayak contact. His daily target of 20km per day (10.79 nautical miles equivalence) was current dependent and led to distances which ranged from 18km in 5 hours to less than 1km in 4 hours of swimming. Despite Ben’s heart stopping on Day 21 due to Portuguese Man O’Wars’ smothering him, Ben continued his swim five days later only to have the vessel damaged in a severe storm on Day 33. This made any further attempt to complete the swim dangerous for Ben should he require vessel support in an emergency again. The vessel Captain Nigel Taylor-Schofield therefore halted the swim on the grounds that it simply would take too long with the damaged vessel to reach Ben in another emergency. Despite refusal and stoic objections from Ben, the skipper’s decision is final at sea and Nigel halted the swim. However, Ben and his team achieved a verified final distance of just under 200km. It is with the lessons learnt from 2015-2017 and a far superior vessel, that Ben and his team intend to make history starting in October 2022 and show that truly nothing is impossible for an ordinary man, out to achieve the extraordinary. More importantly, Ben hopes to raise over £250,000 for his charities and inspire our children to be all that they can be in a world where their struggle is daily.

"Congratulations to Ben on getting to the start point, which is in some ways as difficult as the expedition and objective itself. He is taking on a truly great swimming feat which will require both outstanding endurance and mental strength to achieve. I wish him well and for his charitable aims. Remember Ben! As Sir Winston Churchill once said, If you're going through hell, keep going."